We’ve never done a thrash heavy SATAN MADE ME DO IT episode, believe it or not. It’s fucking crazy now that we think about it, since it’s well documented how thrash is metal’s core genre. Sure, there’s plenty of it in most of our episodes, but looking back at it we still feel we lack a more thrash oriented 45 minute tracklist. That has to do with the fact that we like to keep things freestyle, but also with our special knack for black and death flavors.

An amateur’s mistake, we’re afraid to say, but one we promptly fix with this TALES OF THE MACABRE episode (a reference to the Slaughter track of course). STILL! This is us. There’s some other stuff thrown in there for good measure. Some death, some heavy. It’s all good fun.

We tried to be as less obvious as possible while still throwing a bone or four your way just so it’s not all name dropping.

Your duty, as always, is to PLAY IT LOUD! The rest will naturally fall into place. SHOW NO MERCY! 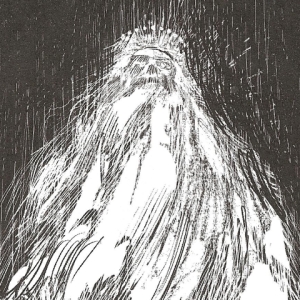 Episode 18 – Tales Of The Macabre

Our first two songs were chosen in an especially conscious manner, so to speak. We wished to open things up with a song from a “newish” band and another from an 80s old-school/underground act. Why? No reason. The especially conscious kind of no reason though which gives it that special flavor. Bah, enough bullshit, we just thought it would be an interesting way to kickstart this episode, that’s all. Spanish thrash metal heroes Körgull the Exterminator start by gracing us with their highly efficient – military efficient we might add! – brand of thrash metal. 2010’s “War of Voivodes” is still their best release as far as we’re concerned, but we chose to highlight a track from the 2013 split with Spanish death metal band Graveyard. Lilith Necrobitch has one of the best voices in the game today. RIGHTEOUS! The second song of the day belongs to Slaughter Lord from Australia. This one is really for the fans of the unrefined. No templates here. They go all out. So you can call them thrash as much as you can call them black or death. Very similar to Poison from Germany in that sense. And that’s just fine.

Stench’s latest album, “Venture”, is said that to be an incursion through the realms of blackened death metal, appealing to fans of Tribulation. Ok. We for once like the cleaner production (we usually enjoy our death metal really punchy and rough), as it opens up to a more cavernous, airy and even exploratory atmosphere. It sounds fresh and ambitious without necessarily slipping into a la la land of puffed up and self-importance egotrip. “Road”, the track we picked up for this episode, also has a nice horror rock and punkish mood to it that it’s not too far from what Okkultokrati has been doing on tracks like “Night Jerks” (featured on Episode 12 – Horror Maximus). You’ll think us mad for saying these things. And we don’t care.

Moving on. Cauldron is the opposite of Stench. They love their old school heavy metal and they’re not afraid to show it. There are references to NWOBHM classics everywhere and Dokken influence is obvious. Sometimes even a bit of speed metal creeps up. For instance, “Nitebreaker”, their strongest song and the one we feature here, starts up with a nice solo with Marty Friedmann’s fingerprints on it, and there’s something on Jason Decay’s voice here that is faintly reminiscent of… Steve Souza’s voice tone? Anyway, lots of catchy riffs, strong melodies, sing-a-long choruses, a great album cover and a cool video overtly evocative of horror movies from the 80s. Yeah, maybe, if we think about it, this is just plain revivalism, but at least the heart is in the right place and Cauldron do a good job at it.

Protector lacks the recognition of other, larger German thrash joints. We speak of course of the classic German trio (plus Tankard ahah). Protector is not as unheard of as Poison (these guys have actually put out full length albums and are, you now, active), but the band could use some better PR. We’re doing our part by playing a track from 1989’s “Urm The Mad”. The interesting thing about this recording is that it’s not really meant for any mosh pit craziness. Again, this is from 1989! By this point thrash metal had more vices than a chronic alcoholic with a developing cocaine addiction on the side. So a big cheer to Protector. Great track, great album, great band. Heathen is also a great band. Shit, these dudes are plain awesome! Again, they don’t rank among the Metallicas and Slayers of the world nor do they really seem to have that ambition. But Heathen certainly compensates lack of mainstream awareness with on-the-point, clinical as fuck – technical if you will – and melodic (the good kind!) thrash/speed metal with plenty of NWOBHM tinges.

We were talking about Steve Souza back there and suddenly we can’t resist the urge to return to Exodus’s first albums (we just realized there’s a new one launched weeks ago) and just shove a song right into this episode’s throat. It’s “Chemi-Kill”, one of our faves from these guys. Steve Souza is a beast, Gary Holt just can’t stop himself from being amazingly good on the guitar… what a fucking great riff. And the lyrics about environmental policy are just too 80s metal to resist. Guys who badmouth “Pleasures of the Flesh” because “it’s not Bonded by Blood!” are idiots.

If you just can’t have enough Mercyful Fate, try and have a go at Portrait’s eponymous album. It will be as close as you get to King Diamond’s band (they even named themselves after “Fatal Portrait”), AND it’s good. But mind you, we’ll just vouch for the first album. After that one, they got a new guy on vocal duties that we’re not so enthusiastic about.

A change of pace if we’ve ever heard one ahah That’s of course the mighty Bulldozer with “Heaven’s Jail” from 1988’s “IX”. Very interesting use of the guitar strings here. It sounds like second wave black metal for some reason. Mayhem especially. Thorns too.  Curious indeed! We follow it up with Sarcasm from Slovenia. 1989’s “Crematory” is the only thing we’ve listened really and not everything there is gold. Still, “Runaway” was asking for a play. And at just 02:55 who can resist?

Abscess was long overdue on a SATAN MADE ME DO IT episode. Hell, on Episode 16: Graves In The Water we promised we would fix that, and fixed it is. We’re big fans of this Chris Reifert (ex-Death, ex-Autopsy) death metal/punk outfit, so here it is. Bask on it.

We’re going down, down, “Downer”. We realize it’s risky to go with a Nirvana track here. There are still lots of prejudices and misunderstandings about them, especially amongst metalheads who just can’t forgive the so called “grunge” movement because it ruined their glam metal. Well, only if you’re an ignorant who throw stuff like Nirvana, Melvins, Tad or Mudhoney into the same “grunge” waste bin where the mainstream media and major labels threw absolute shite like Bush, Pearl Jam, Stone Temple Pilots, Creed or Nickelback. And then you have no possible salvation. Or maybe you were just a kid or teen growing up and just rebelled against the huge media attention that came along with “Nevermind”. The good news is: redemption is at hand. You just weren’t listening, that’s all. You can fix it now. Just stop sulking and LISTEN TO THE GODDAMN MASTERPIECE that it is “Bleach”, recorded by a mere 600 dollars on an eight-track machine and heavily influenced by hardcore punk and by metal all time-faves Black Sabbath and Celtic Frost. EVERY SINGLE TRACK on this brute of an album is amazing and raw. The cover art is amazing. Just let yourself go.

No comments about the last “track”.