“Like howling dogs I sing.” We went ahead and spoke to darkness to conjure up this one. That doesn’t mean this is a particularly crushing SATAN MADE ME DO IT episode; it’s just the weirdest sounding one we ever did. It was a conscious decision. And honestly, we are in love with the end result.

This episode is as freestyle as it gets. There’s black metal, industrial, hardcore, grind and old stuff that is *still* ahead of time. You’re not afraid of a little experimentation, are you? We don’t want this relationship to become stale…

PLAY IT LOUD! Kick and scream. Break a dish or two if you have to. This is only the beginning. 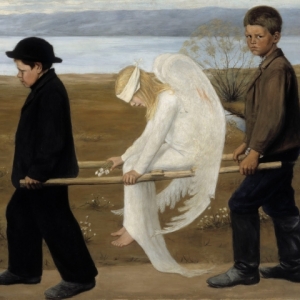 Second wave black metal is a touchy subject. Don’t get us wrong, we feel it started out great! But like most cool things in life it got real ugly, real fast. The traditional Norwegian black metal riff has been used and abused to the point of exhaustion and severe misinterpretations of what makes second wave black metal such a cool thing continue to give birth to seriously sleep inducing acts. This is the first time we open things up with a Norwegian black metal band, but fear not! It won’t leave you indifferent. If Fenriz is to be believed, Snorre W. Ruch is one of the originators of the Norwegian black metal riff (along with Euronymous) and the demos Thorns put out in the early 90s were profoundly influential. Unfortunately, he was in the wrong place at the wrong time, and before things could really blew up for Thorns, Snorre was sentenced to 8 years in prison for “being an accomplice” in the murder of Euronymous. Now the good news is that he kept working on his music. And “Ærie Descent” from the 1999 split with Emperor is still one of the greatest examples of futuristic/experimental/whatever-the-fuck-you-want-to-call-it black metal we know.

Carl-Michael Eide might not be as influential as Snorre was, but there are few musicians out there who get metal the way this guy does. Virus is worlds different from Aura Noir, sure. But it’s an equally brilliant band. “Road” from the band’s first album is hypnotic as fuck and a great way to state our intentions in making a weirder sounding SATAN MADE ME DO IT episode. It leads nowhere, you say? Friend, you’re just along for the ride. Hitchhike a ride one of these days and see where it can get you.

Rocket from the Tombs (not to be confused with Rocket from the Crypt) barely lasted a year (1974-75) and they didn’t even get to the recording studio. But that didn’t stop them from being vastly influential on what would later become the punk and hardcore movement. Building up on the Stooges and Lou Reed legacies, RFTT played some of the sharpest, roughest more nihilistic and volatile rock ever produced by then, no doubt influenced by what was the industrial Cleveland landscape at the time. Kinda like Cleveland’s The Fall? Well, while internal power struggles quickly torn the band apart, something good could forever have been lost, except that from the ashes of RFTT two other influential bands would emerge: Pere Ubu and the Dead Boys. Recently, they could not resist to the lure of the “reunion tour” (damn them all), but the track we’re sharing with you – piercing and furious in equal measures – comes from “The Day the Earth Met the Rocket From the Tombs”, a collection of bootlegs from the 70s (hence the poor sound quality).

After some Tokyo bombing, we give you sonic terrorism from The Berzerker. We know, we know, we’re aware that we have said in the past that we’re strictly against triggered drums and drum machines. But since we’re treading on a more “industrial” path here, we feel we have kind of a leeway on the strictness. These boys define their own sound as “industrial death metal”, which makes sense as it clearly draws influence from death metal and grindcore bands such as Napalm Death, Morbid Angel or Godflesh (all of them fellow bands under Earache’s roof) as well as from gabber (basically, electronic hardcore). This is not for everyone, but that is something that The Berzerker not only understand but actually make it a point to tease. This is as confrontational and extreme and over the top and exploitative as it comes. For “Reality”, for instance, they released a video flaunting graphic imagery of cadavers, eventually leading into broadcast banish.

Yup, we’re playing Sarcófago again. “It’s the last time, we promise” – said no one, ever. In other words: deal with it! MOVING ON!

Ahhhh, Von… These guys take a lot of heat for reasons we don’t quite get. Sure, their LPs are pretty bad by any standards, but the legendary “Satanic Blood” demo released in 1992 is a fucking classic and surely influenced two of most popular Norwegian black metal bands of all time: yes, you guessed it – Burzum and Darkthrone. It’s weird to think that these guys are from the USA though, a country that never had a lot of black metal to begin with in the 80s and early 90s. There was NME and Goatlord that we can think of right about now (Profanatica too, maybe… and should we count Slayer’s “Show no Mercy” also?). It’s just strange. Seems like Von came out of fucking nowhere. And with a style that was honestly refreshing for the time! We don’t even have to explain it. Just listen to it.

GAS MASK Horse (recommended by our good friend Márcio Matos) achieved the impossible: a cover of “Witching Hour” that actually make it sound even more thrashier, lo-fi, organic and poorly played than Venom’s original! In the end, it has everything to do with GAS MASK Horse (a moniker for Chicago’s Joshua Piotrowski)’s DIY ethics, including homemade production and self-publishing (this was released originally as a cassette). If you care to listen to his “Full Moon Hysterya” album, expect something not far from a horror movie soundtrack with hints borrowed from black metal and punk.

Not only The Body are a remarkable band (we featured them on Episode 5 – Down With The Nails) but they are also great at giving us tips. Take for instance Author & Punisher: what an AMAZING project! Ministry, Godflesh, Einstürzende Neubauten, Earth or Sunn 0))) all come to mind when you listen to this. It’s a heavy, crushing, hungry and inhuman sound. Tristan Shone, the guy behind Author & Punisher, defines it as “an industrial doom and drone metal” made primarily of machines/controllers and speakers called “Drone/Dub Machines”, designed and fabricated by himself. “The devices draw heavily on aspects of industrial automation, robotics and mechanical tools and devices, focusing on the eroticism of the interaction with machine” (ok, DO NOT search for “sex machines” on Pornhub). We mean, this guy is nothing short of a “Giger of sound”!

We bring this episode to a close with a cult favorite of ours. Mefisto was one of the very first extreme metal bands from Sweden along with Obscurity, Merciless and, of course, Bathory. Their two sole demos are not easy to categorize. They played a hybrid of black, death, thrash and speed metal that was truly ahead of its time – and to tell you the truth, nobody ever sounded like them going forward. Maybe that explains why Mefisto had virtually no support back in the mid 80s. The band was one of the few that Bathory acknowledged and their influence can be heard in bands like cult heroes Nihilist (later Entombed). Both Mefisto demos will soon be re-released on Vic Records, so start saving some money and PAY TO DIE!

Oh, there’s one more song? How about that… Try guessing what that is. You know, for fun. There’s a hint somewhere in the post.