We weren’t joking. The last episode we did for Radio Quântica got real nasty. We were in a pissed off mood and didn’t feel like taking things nice and easy. We lead a happier life now, thank goodness, and that is reflected on this month’s 45-minute episode.  You know when Donald Trump said his net worth fluctuated according to his feelings? It’s similar. Except that Donald Trump is a total fucking douchebag and we are actually pretty cool.

If there’s a theme at play here we can’t really tell you what it is. What we can say is that it feels good. Our ears are happy; our necks are sore. Just don’t dance. You’ll anger Tom. 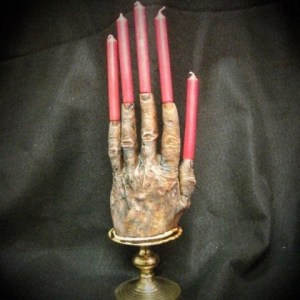 Already there’s great metal music from 2016 to discover. We went with two fresh songs from Canadian bands Cauldron and Striker. The former released an album that’s not entirely incredible, but still a nice fix of good heavy metal. “Burning at Both Ends” is our favorite track by far and a great way to start things off. Striker had a much more consistent release with “Stand in the Fire”. Some might bash the vocals at times. Fuck those people. That’s the title track you’re listening to by the way. Don’t forget to check that cover art. It’s like something out of Doom.

One of us is playing strictly female fronted bands on this episode. Night Viper leads the pack with a great classic doom/NWOBHM track. What you don’t know, if you never listened to this track, is that it starts with a FOUR-MINUTE-LONG (out of a 7:13 song) boring intro that we chose to leave out at the cutting room floor. We just went straight to the point, probably doing Night Viper a favor along the way. Anyway, Night Viper are part of what seems to be a “trend” of classic doom influenced bands with woman-singers: Christian Mistress, Jess and the Ancient Ones come to mind, even if Night Viper are a bit more thrashy (think old school Metallica).

Annnndd…. BREAKS. Slowing down things a bit with Lee Aaron, one of a string of “hard rock pinups” from the 80s (we even thought about throwing Lita Ford in the bunch). Great voice here. Nice classic riff, great atmosphere. Unfortunately this is probably the only really good track from Lee. Things started to get only worse after this.

We don’t know what’s the deal the band’s name, but Whiteness produced some damn pleasing couple of hard rock tunes. We don’t know much about them. Well, except that they were all really white. Is that why?… whatever. Just look at these sweet haircuts!

You all know this next one, we suppose. SATAN MADE ME DO IT often disagrees on a great number of things, but we both adore Megadeth’s early shit and this song specifically. The fury with which he spews out those words is simply wonderful. Often you can easily replace a tune’s lyrics for completely different words and if the composition is good it’s still a great thing. In this case though? The story is the main reason why this is such a crazy ride. You’re hearing the original mix of course. Megadeth’s remasters are ATROCIOUS and should burn!

We should have included a Girlschool track in our last Lemmy-dedicated episode. We redeem ourselves now, with this perfect metal-punk jewel of a song. Wikipedia tell us that Girlschool are the “longest running all-female rock band, still active after more than 35 years”. Even more important, they’re one of the best. There’s a new album from 2015 that we still haven’t listened to, but word of mouth seems to be positive, so we have to lend an ear to it soon, and you should too.

“One. Two. One, two, fuck you”. That’s the attitude, completely in tune with a band that argued that the measure of true art is how confrontational it is. Plasmatics are amazing, and a big deal of it has to do with the outrageous Wendy O. Williams. One of the greatest punk bands in the world? You bet. This is from their “Beyond the Valley of 1984” album (Wendy is credited as singer and chainsaw player). It sounds already a bit metal, but they moved even closer with their next release, the aptly named “Metal Priestess” EP. Go listen and read everything about them and Wendy. You’ll find out, for instance, that this track, “Masterplan”, has a cover by Lemmy, among many other interesting stuff.

“Into the Pandemonium” is one weird beast. Bold as fuck too. Shit, it starts out with a cover, a song that in most ways has little to do with Celtic Frost’s previous metaphysically perfect album, “To Mega Therion”. And then it keeps getting strange. Even for 1987, this was one eclectic motherfucker of an album. Still feels real fresh today too. Tom tries to do a lot more with his voice, but without ever NOT playing in his very unique style. If you’ve never listened to it in full give it a shot. Well worth the experience.

Then comes the simply named “Satan” from 80s Belgian band Acid. We could have easily included this song on our previous 45-minute episode, which we dedicated to Lemmy&Motörhead. Underplayed as fuck. Come for the speed and raw sound, stay for the vocals.

And finally, Warlock. You can’t do female-fronted metal bands and not include Doro Pesch (yeah, yeah, the older of us also had a teenage crush on her like every other metalhead at the time). So here you go. It’s “Earthshaker Rock”, from the “Hellbound” album, before the close-to-mainstream success of their following release, “Triumphf of Steel” (“all we are, we are all, all we are”, blablabla).