It all comes down to a matter of temperature, doesn’t it? In the last episode we ventured through a different kind of metal, colder and machinelike in nature. It was tremendous. But this time, as the leaves start dying and the rain pours outside, we feel the need to return to a warmer and more organic brand of metal, the kind of metal that makes you feel fuzzy inside. Or maybe it’s the rum talking. For that purpose, nothing better than going back to the roots. This one is mainly NWOBHM and early doom inspired.

So fall down to your knees and beg:

Our Father in hell,
Damned be your name.
Your kingdom come,
Your will be done,
On earth, as it is in hell.
And lead us into temptation,
And never deliver us from evil. 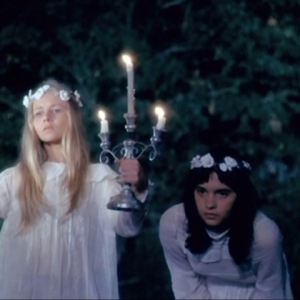 Episode 20 – Don’t Deliver Us From Evil

We set up the new episode with a weirdo track from Six Organs of Admittance, one of the main projects by folk-psych experimental guitarist Ben Chasny (the other notable project being the excellent Comets On Fire). Genius guitarist John Fahey is an obvious influence here. Later on the episode you’ll start to realize that it’s not so weird to have this as a starter. The psychedelic and even folkish themes, soaked in smooth droning, has everything to do with the roots of what would form early doom and NWOBHM. Anyway, we promised you real metal and we don’t want to hang out to dry on it, so we move quickly to heavier pastures with the “heavy witch doom” outfit Reino Ermitaño, from Peru. An acquired taste, these guys. This track has a nice groove going, and we particularly enjoy Tania Duarte’s unique blend of sexy but savage Spanish singing.

Next up, we have some 1983 worship. Arizona’s Ashbury checks in first with their 70s sounding brand of progressive music meets southern rock. In retrospective, one could even make a case about a certain “epic-metalness” to their sound. We could conceive riding out into the sunset while singing to these guys. Both relaxing and exhilarating. Hiroshima’s “Soldier of the World” single is easily one of heavy metal’s best. Flawless production and musicianship. In the particular case of this “Nuclear Nightmare” track there’s also a world-destroyer chorus. Also, the closing drum bit gets us going harder than what is probably healthy. Raimo “The Quick” Pikanen is one the most underrated drummers in metal. Get to supporting or die!

There are many outfits called Astaroth out there, but this one is probably the more obscure of them all, even if they’ve garnering a decent cult following, thanks no doubt to the psych ‘em all trend around. There’s not much to say, because basically all these guys’s “career” comes down to is a lousy single, and apparently no one seems to be sure exactly when it was released. But it’s definitely a heck of a Satanist song rearing its ugly head from the 60s.

More witchcrafty doom/NWOBHM next with Christian Mistress. Like with Reino Ermitaño earlier, what sets the difference here it’s the vocals, thanks to Christine Davis dominant raspy voice, right up there with some of the best female voices in heavy rock.

When you think Switzerland you think Hellhammer, Celtic Frost, Samael… Time to add an extra band to that list. The Krokus-influenced Black Angels are exquisite rockers in their own right, effortlessly mixing hard rock with NWOBHM. Vocals are mightier than the sword. Minotaur from Canada doesn’t really have much to show except a single in 1984 and a few other recordings. But that dude sounds like one motherfucking Paul Di’Anno (Steve Harris himself said that to the band at a 1985 Toronto show, where Minotaur was opening for Anvil) and that’s damn cool. Upbeat NWOBHM sounding track this one is. We are throwing some obscure shit your way this time haha

Minotaur’s ridiculously similar Paul Di’Anno vocals got us pining for the early Iron Maiden records, which in turn got us thinking this would be a nice occasion to present you with some of the best rock coming out of Portugal right now. Killimanjaro are three kids from Portuguese capital of rock, Barcelos, doing an infectious blend of NWOBHM and stoner rock. Think early Iron Maiden meets Queens of the Stone Age. Believe us: it’s GOOD. In “Hook”, the track we picked up from their eponymous album, the Maiden influence is almost palpable, especially in the rhythmic progressions: Clive Burr and Steve Harris would be proud. If you get the chance, check them out in any way whatsoever: the album is very good and the live performances are really intense.

As for Lord Vicar, they don’t need any introductions. They’re Finnish masters of old-school doom via Black Sabbath, The Obsessed and Saint Vitus. They don’t have no Ozzy or Wino, but it’s top stuff any way you look at it.

Black Death’s sole 1984 album is as genuine as it gets when it comes to heavy metal music and one of the coolest bands to like. What we have here is a very 70s influenced brand of heavy music (Priest, Kiss, Motorhead… it’s all in there) with a live production reminiscent of punk’s DIY modus operandi. Then there’s also Siki Spacek’s very authentic and cool sounding vocals. Simply perfect! “When Tears Run Read” is basically their “heaven and hell, beauty and the beast” ballad. Intro sounds like “Nothing Else Matters”, we shit you not! Very satisfying track, with great build up, guitar leads and vocal performance. You can feel his fucking pain! Less than three minutes left in this episode. The choice was obvious. We give you “Debt of Pain” by Holy Terror.