What a weird, weird episode.

It is, excuse us, a damn fine one. But still. And it all starts with the title. Have we ever been more over the top? Doubtfully – and we were the ones coming up with an episode called “Horror Maximus”! But say it out loud: Übertragic Deathvastation. Ahhhh it just rolls off the tongue in glorious blasphemic anger (another great title now that we think of it). So what’s this about anyway? Hell, we don’t know. Those first 7 minutes are GRIM. Then it gets brutal, black&rockin, finally becoming… goofy. Does this make ANY sense? No, and that’s why it has to work.

Loud or go away. 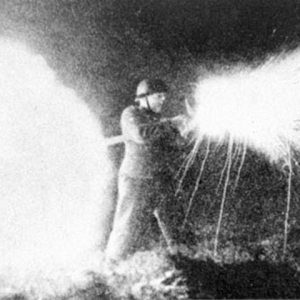 Both Thorns and old Mayhem are fundamental if one is to understand where the traditional Norwegian black metal riff comes from. Of course it all started with Bathory’s third album, but the template was set later, by Snorre and Euronymous. This is significant. Too much attention is given to who came up with genre x or y, too little to the people who made musicians look at their instruments with a different set of eyes. How would many metal bands sound if Tom G. didn’t bend the strings like he did in Hellhammer? Probably really fucking boring haha

Third track, third demo. Still from Scandinavia, but this time it’s last year’s obscure release from Reverie, whom Sindre Solem (more of him next) described as “a danish version of Master’s Hammer / Tormentor meets Mayhem – Deathcrush with loads of incense”. Yeah!

After a short intermission – some food for thought with the godlike Charles Bronson acting as Jesus’s angel of death in “Death Wish 2” – we go back to Norway with more newish death metal stuff. It’s Reptilian and this track is their ONLY release so far. Very Obliteration-like if you ask us; it could come out straight from “Black Death Horizon”. The voice is pure Sindre Solem. You can feel annoyed by the similarities or just enjoy how good it sounds: we go with the second option. Apparently these kids already stroke a record deal, so we will be having more of them in the future, for sure.

One of us went 100% Norwegian. You’re listening to Mortem, a band with vocals so distorted and reverb heavy they are fucking ambient. Total uninviting production. There was already plenty of that prior to 1989 of course, just probably not quite like this in the context of old school black/death metal (well, there was that maniacal Parabellum EP in 87). Also, everything sounds more special when played in such a sloppy manner. It’s beautifully sincere. Amputation is another one of those Norwegian bands that saw pretty popular black metal people meddling with the death metal craze before following on the steps of Mayhem. Highlight again goes to the vocals. Sound more evil thrash (Devastation, Minotaur…) than typical death growls.

Back and forth in time, but still in Norway. From Kolbotn (homeland to Darkthrone and Obliteration) to be exact. This is Gouge, from their just released (two weeks back) old-schooled death metal debut album, “Beyond Death”. Their EP “Doomed to Death” was one of the fastest selling records from Hell’s Headbangers, so expect lots of hype around this little critter. We just bought it, so we’re still getting the hang of it, but it sounds raw and promising, which it’s not surprising if you think we’re talking about ex-Condor members Christoffer Bråthen and Herman Holen. What can be a bit more surprising is that it sounds so much more akin to american death metal, something that can be more easily understood in the light of the band’s statement that Gouge started “after an overdose of Repulsion, Dr Shrinker, and Funeral listening sessions”! “Breath of the Reaper” is the promotional track, but we’re going with “Chaos and Horror” instead.

Gouge’s “american sound” is our excuse to get out of Norway for a bit. Besides, because Midnight’s “No Mercy For Mayhem” is also a recent release from Hell’s Headbangers (well, from last Summer), which seems to be on a roll lately. It would be easy to pan Midnight as just another outfit (well, basically it’s a one guy band) in the Venom meets Motorhead with a pinch of Hellhammer formula, but the fact of the matter is that this is sheer unadulterated rock’nroll studded leather FUN, something that this episode was lacking a bit. So here you go!

People give a lot of shit to “Plaguewielder”, but there’s plenty to like here. Nocturno Culto likes to use a lot of strings and if you’re into that you should find numerous reasons to worship this album. We love the closing track. There’s both Sarcófago and “Transilvanian Hunger” in there. But after Midnight it made much more sense to go with the black and roll track “Sin Origin”. It’s a weird song actually. There’s the Hellhammer thing going on of course, but not everything there is about rocking out. The outro is also fucking long and monotonous (in a good way), almost as if out of a Burzum album. And then there’s Lobotomized. You want to know if mixing schlager and metal/punk works? Fucking look no further, mate! It does and it’s glorious. Best album from 2013 that apparently no one heard.

“POUNDING WHAT? POUNDING WHAT?!?!” “Pounding Metal”, from Exciter, you mothers! FUCK YEAH! “Goin’ to the show pounding your fists to the air / heads slamming, brains bashing, it’s over the top you don’t care”. It’s anthem rock, WE DON’T CARE! We took this live version from the “Long Live The Loud” remastered CD version (the studio version from “Pounding Metal” belongs to their second album, “Violence and Force”). Exciter’s first couple of albums sure deserve more love, and their artwork covers were GREAT! POUNDING METAL!